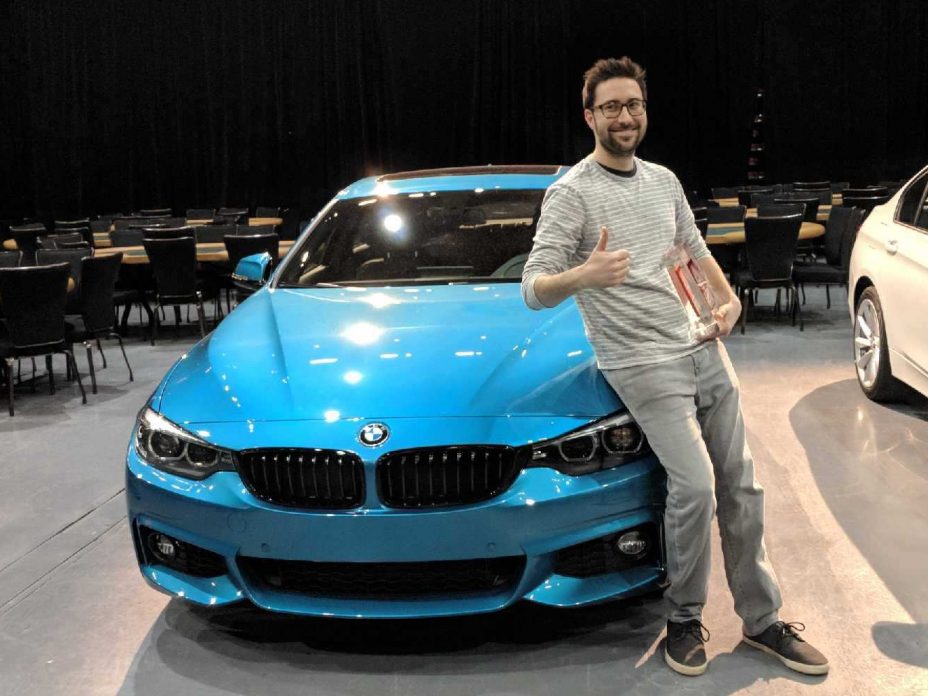 It was a wild ride in the 2018 Chicago Poker Classic $2,000 Main Event with $1 million guaranteed and a new BMW added. The event drew 646 players who all ponied up the $2,000 buy-in. The 91 players who made it through the two starting flights returned for Day 2 on Sunday.

They reached the money at 72 players and they were down to the final ten a bit earlier than expected. Bob “The Driller” Dokhanchi held the chip lead coming into the final day of play Monday, but he had some tough competition to get through.

The day started with a bang when short stack Joseph Saltanovitz doubled through Al Motiwala in the first hand of play with sixes versus queens. Both players flopped a set and Saltanovitz turned quads to stay alive.

Frank Cerminara was first out in 10th when he and Aaron Steury got in stacks, Cerminara ahead with aces against Steury’s kings. A king in the window ended the tournament for Cerminara.

Chris Carriger lost most of his stack to Cerminara with pocket jacks when Cerminara made a flush after the chips went in, then lost the rest to Eddie Blumenthal with jacks against Blumenthal’s ace-king.

WSOP bracelet winner Aaron Steury went out in 6th place, getting his remaining stack in with ace-king against Blumenthal’s pocket jacks and finding no help from the board.

Then, Al Motiwala took most of Michael Moncek’s chips when both players rivered trip jacks, Motiwala having Moncek’s kicker notched. Moncek was left with crumbs, but right after, Shepsky and Motiwala got in stacks on a huge flip, Motiwala having Shepsky covered just barely.

Motiwala had queens and Shepsky had ace-king. After a safe flop, a king on the turn gave Shepsky the winner – and the chip lead. Motiwala proceeded to triple up, then double up and Michael Moncek with his very short stack went out next in 5th.

Start of day chip leader Bob Dokhanchi finished in 4th when he shoved with pocket fours and ran into the nines of Shepsky, failing to improve. Al Motiwala held on for as long as he could, but eventually bowed out in third, leaving Shepsky and Blumenthal to play heads up, Shepsky with a 4-to-1 chip lead.

Blumenthal doubled up early in the match with ace-queen against ace-four all in preflop, and proceeded to grind back until stacks were about even. At that point, they decided on an even chop while leaving $10,000 and the car up top to play for.

They battled back and forth for a while and eventually all the chips went in on a 9s-5c-2c-8s board, Blumenthal with pocket twos for bottom set and Shepsky with Ac-4c for the nut flush draw and a gutshot straight draw. The 6c river all but sealed it for Shepsky, who rivered Broadway on the final hand with Ac-Tc to end it.

Heads-up started off a bit rough for Shepsky. “I usually feel good heads up and then I was like, ‘What the hell’s going on? I can’t win a hand here.’ And then, it ended up working out at the end.” Shepsky, who considers himself a sit ‘n’ go and heads-up specialist online, felt confident coming into the final table and treated it much like one of those sit ‘n’ go’s.

It’s been a couple years since his last win, which came 2.5 years ago at the HPT Black Hawk Main Event. That was a big one and not that long ago, but as Shepsky put it, “Two years is an eternity” (when it comes to winning poker tournaments).

Shepsky has been trying to win big here at his home casino for so long, so to finally get it feels great, he says.

He’s also pretty excited about his new whip that he can cruise his family around in. Congrats to Matt Shepsky, winner of the CPC Main Event, and to runner-up Eddie Blumenthal, who earned a pretty nice payout of $185,366.