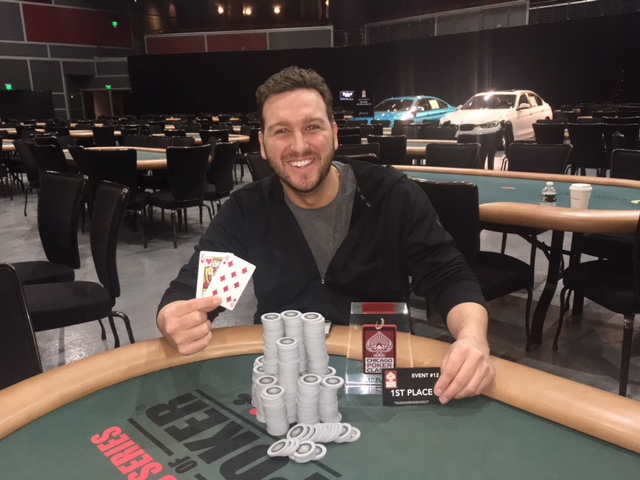 A total of 185 entries were tallied creating a prize pool of $37,370 and the top 21 players got paid. In the end, Francis Pasqualino came away with the victory, $5,123 and a WSOP Main Event seat worth $10,000. The final five players decided on an even chop for just over $5K each and to play it out for the seat.

Pasqualino, the Long Island native turned downtown Chicago lawyer, drove down to Hammond for the tournament with a friend and got in late, then busted and rebought just before the close of registration. Bullet #2 was quite a bit more lucky as Pasqualino found aces and doubled up with them shortly after taking his second seat in the tournament.

He proceeded to run “pretty pure” from there and went into the final table as one of the bigger stacks. After they got down to five and decided to chop it up evenly and play for the seat, Pasqualino said he switched up his strategy a bit, going for all or nothing to take a shot at the seat.

One of those all-or-nothing moves involved him getting his stack all in preflop with pocket sevens against WSOP bracelet winner Nick Jivkov, who held jacks. Pasqualino spiked a seven to double through, and just ran pure some more after that.

In the final hand against last year’s $250 Turbo winner Sean Chapman, the flop came K-6-5 in a limped pot. They got all the chips in, both players with a pair of kings but Pasqualino’s kicker best with K-8 to Chapman’s K-2. Pasqualino needlessly improved to two pair on the 8 river and the Main Event seat was his.

Pasqualino is very happy about getting to play in the WSOP Main Event for the first time.

“It’s pretty exciting. This is nuts. I could cry.”